Day in the Life

Day in the Life 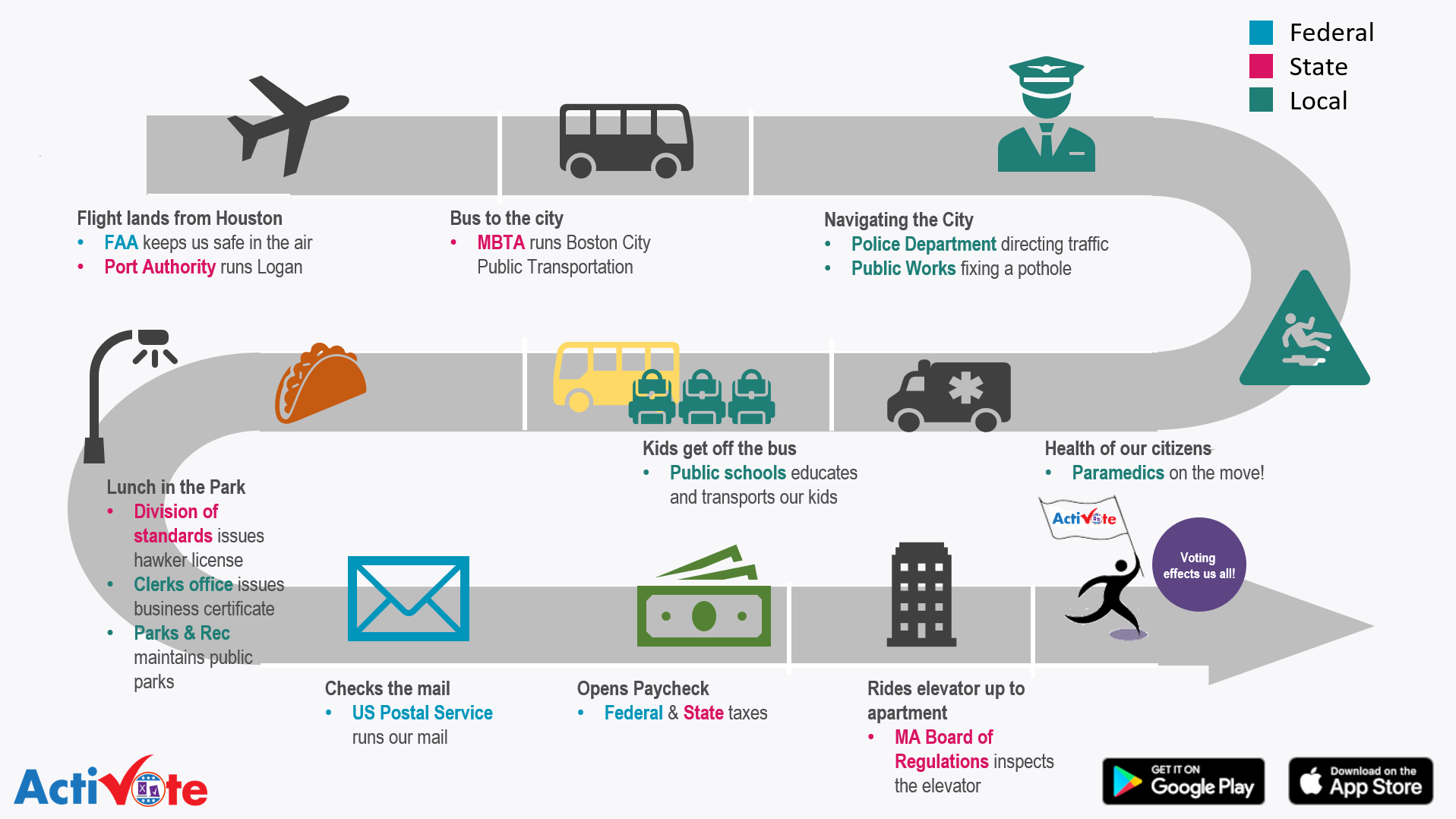 Jenny’s plane from Houston touches down in Boston at Logan Airport. She is tired, but happy to be home. She works her way through the bustle of activity at the airport and gets on bus SL1 to South Station, where she starts her walk through Chinatown. A police officer is guiding traffic around a sidewalk & street repair site. She steps aside to let a group of excited school kids run past, backpacks slung over their shoulders. She faintly hears the siren of the paramedics on their way to help. When she reaches the Boston Common she buys a taco from one of the food trucks in the park, and she enjoys watching the activity in the park. A truck is slowly making its way around the park, cleaning and fixing the street lights. Satisfied after her meal, Jenny gets up for the final stretch to her apartment where she picks up the mail, including her paycheck. She takes the elevator up to her apartment and, exhausted from her travel, quickly falls asleep.

Without realizing it, Jenny’s day was heavily impacted by government. Let’s count the ways:

(1) Logan Airport is run by the Massachusetts Port Authority (state).
(2) Buses in Boston are run by the MBTA (state).
(3)The Boston Police Department and the Fire Department keep us safe. (local)
(4) Potholes are repaired by the city. (local)
(5) Children go to the Boston Public Schools (local, state and federally financed) to be educated.
(6) Then the taco truck had to get a business certificate, a hawker and peddler license (state), and a food truck license from the Mayor’s Office of Economic Development (local) in order to operate.
(7) The Boston Common is maintained by the Parks and Recreation Department (local).
(8) Jenny’s mail was delivered by USPS (federal).
(9) Her paycheck is taxed (state and federal).
(10) Finally, her apartment building’s elevator is inspected by someone certified by the Massachusetts Board of Elevator Regulations (state).

All types of government, federal, state, and local, have a profound presence in our daily lives. And ultimately, we control all these bodies through the people we elect to represent us. Strangely, if we take turnout to local elections as a measuring stick, we pay hardly any attention to our local government. In 2015, the last time Boston held city council elections in a non-mayoral race year, only 7% of eligible voters showed up to vote. What’s more, so few candidates ran in 2015 that preliminary elections weren’t even required for most seats.  Jenny will be voting local – will you?

Download our newest version today and help all Americans to vote local!