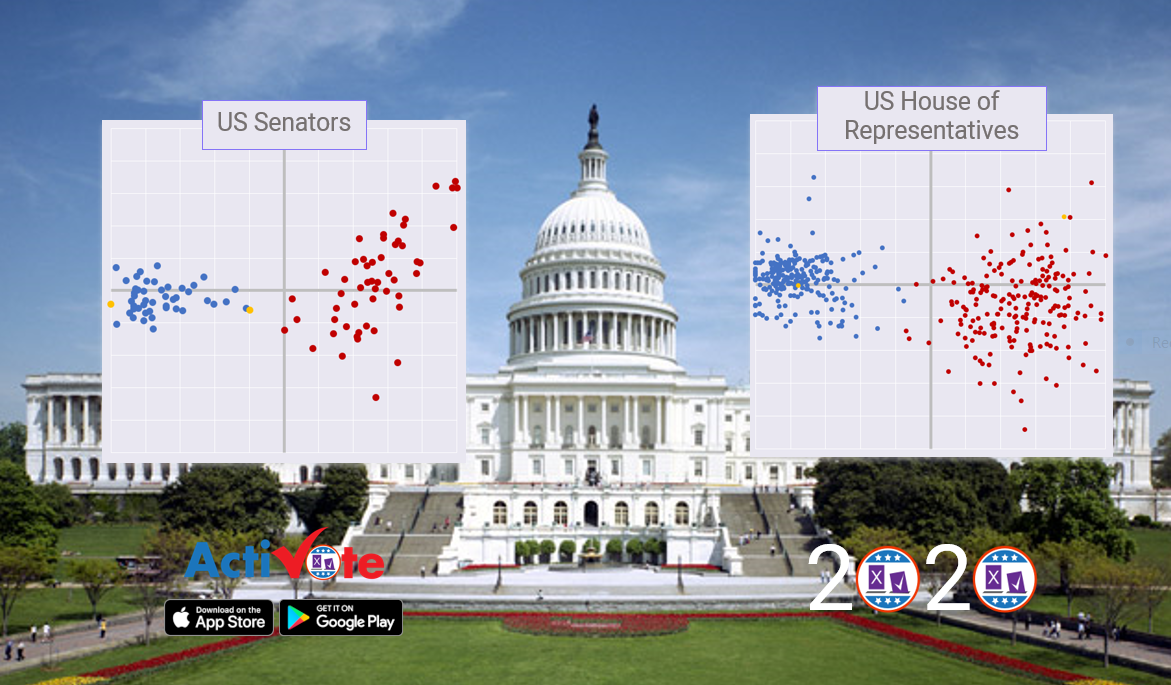 At ActiVote we want to make it easy to vote your values. For that to work, we aim to visualize your position in the Political Matrix, as well as those of any candidate you can vote for. With today’s release, we have made sure that all federal legislators are automatically included.

Our current elected officials represent our values with the steps they take in office. Holding those officials accountable is important and our vote to reelect or unseat them shows whether we believe that they are indeed aligned with our beliefs. To support that transparency, we now include all legislators in Congress automatically in the political matrix, without them needing to answer questions.

How do we do that? Well, legislators work on behalf of their constituents by authoring bills, cosponsoring and voting on those bills, with all of those actions part of the public record. So, for every legislator we take their (co-)sponsorships and votes and we determine for each bill in which policy category it falls, how progressive, moderate or conservative that bill is and then interpret their support or opposition to a bill. We then use that information to plot their position in the policy matrix. And the good news is that for many legislators we have hundreds or sometimes even thousands of data points to reflect what they stand for.

Starting today, you will find for almost everyone running for federal reelection that they are automatically shown in the political matrix. This creates some interesting information for the voters!

Or take the Alabama Senate race where Doug Jones took over when Jeff Sessions took the Attorney General job! Jeff Sessions is now running to re-take his seat in a crowded field.

If you wonder why Democrats are depicted closer together vertically than Republicans, it reflects a more unified opinion on some of the key topics that the parties have very different opinions on, such as Education, Healthcare, Immigration and Social Equality. Although this may not always seem to be the case from the debates during this presidential election season, the data shows that Democrats in Congress have on average significantly less variation in their opinions than their Republican counterparts.

We will add the State Legislatures over the course of the next month or so in order of their state-wide primaries and the availability of data and we will be reaching out to all challengers to encourage them to be plotted side by side to their incumbent competitors.

Download ActiVote, check where you fit on the political spectrum and check out the candidates so that you can vote your values. And never miss another primary, special, local or general election!