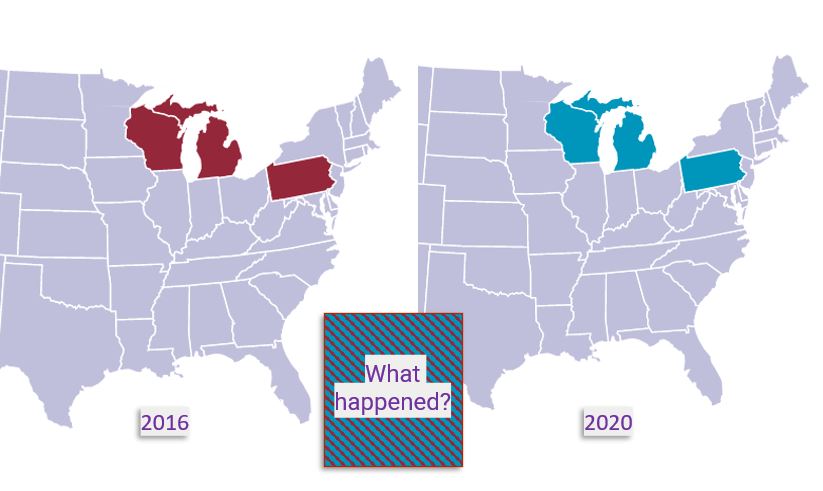 In the days after the election, we have all seen the rollercoaster of results come in. Especially interesting were Wisconsin, Michigan and Pennsylvania, collectively known as the “Blue Wall” which was demolished by President Trump when he won those states in 2016.

In all three states Trump was leading on election night, by large margins. Still, a few days later, they ended up in Vice-President Biden’s column.

So what happened? There are two interesting questions to answer.

The first question has been beaten to death by all major networks: “Why did Trump lead in the initial tally, and saw his lead evaporate later on?” The simple answer is: the votes that were counted first (mostly election day voters) leaned heavily towards Trump, while the votes that were counted last in these states (mostly absentee and early voters and those in larger, more urban counties) leaned heavily toward Biden. That answers the first question.

The second question is actually more interesting: “Why did Biden succeed in winning these three states, while Hillary Clinton failed to do so four years ago?”. We will learn that the answer is NOT that Biden did better in the cities. That is an important conclusion as there have been a few unsubstantiated allegations that something nefarious happened in some cities. Simply looking at the numbers will show that that is highly unlikely as that is, surprisingly, not where the election was won.

Let’s start by looking at Wisconsin, a state Trump won 4 years ago by 0.7% of the vote and Biden won in 2020 by 0.3% of the vote. The following two charts show how he pulled off that win:

The pie chart on the right shows the story for 2020, where we kept the same split of 60 red counties and 12 blue counties, but this time Joe Biden was on the ballot. What is clear from the pie chart is that this time the Trump votes (deep red + light red) just fell short with 49.7% total, with Biden’s blue votes winning with 50.3% of the total vote.

If we now compare the pieces of the pie – three out of four have shrunk in size. One piece, the light blue piece (votes for Biden in red counties), grew from 25.9% to 27.0%. What that means is that while turnout may have been up everywhere (18% statewide), turnout for Biden in Trump Country was up more than the other categories. Thus, Biden did not so much overperform compared to Clinton in the cities, he overperformed in the rest of the state. Also, Trump did not lose Wisconsin due to anything that happened in the cities: he lost because he did not hold on to the enormous margins he had in the rest of the state in 2016.

What about the biggest cliffhanger of all: Pennsylvania? The story is exactly the same in their 56 red counties and 11 blue counties:

In 2016 Trump got 50.4% of the votes cast between him and Clinton. In 2020 Trump has dropped to 49.7% of the vote (as of the writing of this blog, counting of provisional ballots is ongoing). Again, the only pie piece that has increased in size is the light blue piece: the Biden voters in red counties, which has gone up from 16.3% to 17.6%.

This also answers the question whether something nefarious may have been going with vote counting in some of the cities in this election: it is highly, highly unlikely. The cities were not where the action was! The real surprise, hidden in the data, points to rural areas being more supportive of former Vice-President Joe Biden, than those rural areas were four years ago of former Secretary Hillary Clinton, which ultimately cost President Trump the Blue Wall and the presidency.